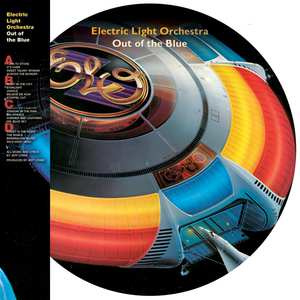 Out of the Blue (Picture Disc) 2-LP - 40th Anniversary Edition

Celebrate the 40th anniversary of Electric Light Orchestra's 'Out Of The Blue' with this brand new double picture disc vinyl package! This 2LP picture disc has been remastered from the original tapes and includes a download code.

Written and produced by Jeff Lynne, 'Out of the Blue' is ELO's bestselling album and features the worldwide hit singles 'Mr. Blue Sky', 'Turn To Stone' and 'Sweet Talkin Woman'.