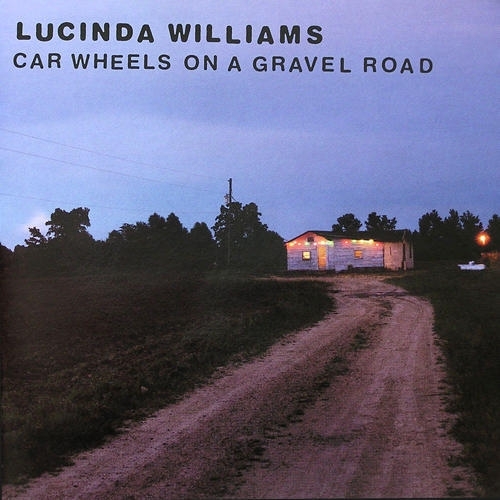 For the past 30 years, Lucinda Williams has channeled her perspective as a proud but vulnerable Southern female into a string of stellar albums, each of which weave Rock, Country, Folk and Blues so tightly that each of the elements seems to disappear. Lucinda Williams (1988) was her breakthrough disc, but her magnum opus, 1998's Car Wheels On A Gravel Road, sealed her reputation as a formidable singer-songwriter.

It took three torturous years to finish this alt-country masterwork, but it was worth it. Williams writes songs that explore the rootlessness of American life, with vivid imagery and gravel-guitar beauty. The album features guest appearances by Steve Earl, Emmylou Harris and Buddy Miller. Williams co-produced the album and it was mixed by Rick Rubin & Jim Scott except "Metal Firecracker", which was mixed by Ray Kennedy.

The album won a Grammy for Best Contemporary Folk Album, and was Lucinda Williams' first album to go Gold. It was voted Best Album of the Year in the Village Voice Pazz & Jop critics poll. In 2003, the album was ranked number 304 on Rolling Stone magazine's list of the 500 greatest albums of all time.

This is the first ever vinyl issue of this wonderful album!