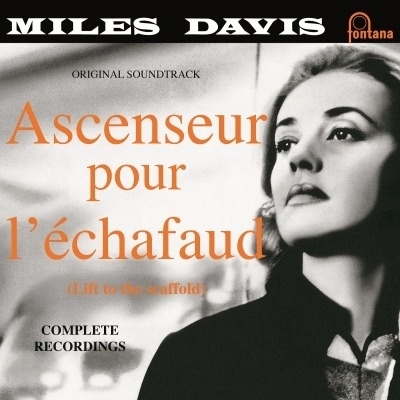 Ascenseur Pour L'échafaud is a 1958 French film directed by Louis Malle. It was released as Lift To The Scaffold in the UK. The film was nothing special, but it did accomplish one thing: it proposed a new ideal of cinematic realism, a new way to look at a woman.

Jean-Paul Rappeneau, a Jazz fan and Malle's assistant at the time, suggested asking Miles Davis to create the film's soundtrack. He showed Davis a screening of the movie, and afterwards Miles knew exactly how to portray the smoky hazed or frantic scenes through sonic imagery.

On December 4 1957, he brought four French Jazzmen (Barney Wilen / tenor saxophone, René Urtreger / piano, Pierre Michelot – bass and Kenny Clarke – drums) to the recording studio "Le Poste Parisien Studio" without having them prepare anything. Davis only gave the musicians a few rudimentary harmonic sequences he had assembled in his hotel room. Eventually Ascenseur Pour L'échafaud has become a great achievement of artistic excellence.

For the first time since its original release in 1958, Music On Vinyl combined the original soundtrack and the additional recordings and created an essential 2LP set with the original artwork.